TOP 5 best deals for Christmas: Surface 3, Xbox One, GoPro and other 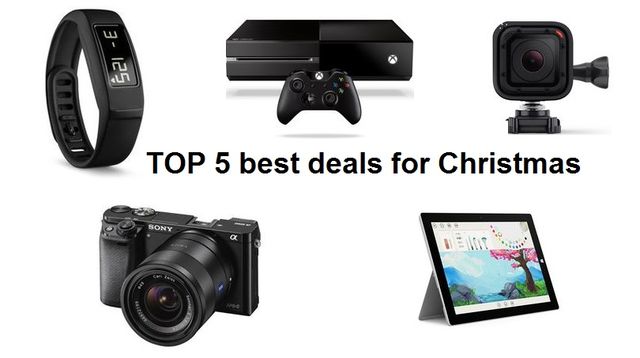 Microsoft have an attractive deal on a new tablet. You can buy Microsoft Surface 3 with discount $100. In addition, during the ordering process, you can select keyboard Type Cover only for $79.99 (regular price $130).

Game console Xbox One for $299

You still have time to buy a game console with a big discount. However, you should hurry, because the deal ends December 26.

If you do not have time to buy game console, you may find the right thing at the time of another sell-off Microsoft, which held since December 22 to January 7.

Fast mirrorless camera is a good buy. Best Buy has a deal that offers to buy the camera with 16-50mm power zoom lens and a 55-210mm zoom lens for only $700. It should be recalled that the standard price of the kit is $1150.

Garmin Vivofit 2 is a good fitness tracker with excellent battery. Tracker is always on the screen and water resistance. However, the bracelet is not equipped with heart rate sensor, which can be a big drawback for some users. Even with this flaw, the price is only $70, which is almost two times cheaper than a regular price!

You may have noticed that the price of many devices have fallen by half before Christmas. GoPro Hero4 Session is not an exception. The most Popular Action Camera is available for only $199. I think that only on Christmas you can buy this camera is two times cheaper than its normal price.